I’ve just finished a major website design for New Dawn Magazine. The site in question is Gnostic Info and is a resource for those wanting to read more about gnostic issues and gnosticism itself – both old and modern.

I am particularly happy with the logo I designed. It contains a ‘G’ that I turned into an Ouroboros, a serpent or dragon eating its own tail. 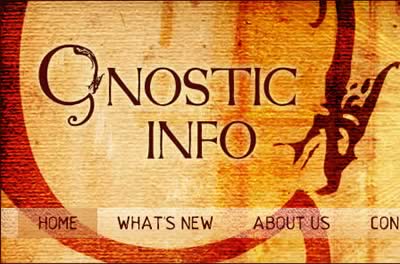 The ‘G’ was a perfect candidate for such a treatment and was the key to the whole design. I actually spent a lot of time on the letterform of the ‘G’ but after that everything else fell into place.

I’d never come across the concept of the Ouroboros until starting this project, and I was fascinated to learn more. It was supposed to represent the cyclical nature of the universe and the famous Greek philosopher Plato wrote of this legendary creature who was believed to have been the first living creature in the universe; a perfect being:

“The living being had no need of eyes when there was nothing remaining outside him to be seen; nor of ears when there was nothing to be heard; and there was no surrounding atmosphere to be breathed; nor would there have been any use of organs by the help of which he might receive his food or get rid of what he had already digested, since there was nothing which went from him or came into him: for there was nothing beside him. Of design he was created thus, his own waste providing his own food, and all that he did or suffered taking place in and by himself. For the Creator conceived that a being which was self-sufficient would be far more excellent than one which lacked anything; and, as he had no need to take anything or defend himself against any one, the Creator did not think it necessary to bestow upon him hands: nor had he any need of feet, nor of the whole apparatus of walking; but the movement suited to his spherical form was assigned to him, being of all the seven that which is most appropriate to mind and intelligence; and he was made to move in the same manner and on the same spot, within his own limits revolving in a circle. All the other six motions were taken away from him, and he was made not to partake of their deviations. And as this circular movement required no feet, the universe was created without legs and without feet.”

The site can be found at Gnostic Info and is full of very absorbing articles.