The Fairy and the Gardens

People have been asking me about the significance of the fairy in this website’s header graphic. So, here’s the story.

Although he illustrated many books and many stories, for me the most significant is J. M. Barrie’s book Peter Pan in Kensington Gardens, for which Rackham provided 16 superb ink and watercolour illustrations. 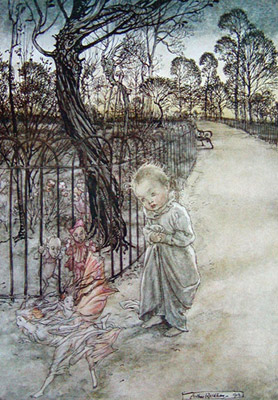 Barrie lived near Kensington Gardens in central London, not far from where I live now, and in fact, a blue plaque can be found today identifying his residence. It is a tidy house on the corner of Bayswater Road and Leinster Terrace.

The story goes that Barrie would walk in Kensington Gardens every day and it was here that he met the children of Sylvia Llewelyn-Davies who inspired him to create Peter Pan. The children and their adventures with Barrie are immortalised in the books, The White Bird (later to become Peter Pan in Kensington Gardens) and Peter And Wendy, as well as the famous stage play. The Gardens themselves are the backdrop for the events in the stories and Barrie was obsessed with the magic of the park and the different landscapes he found there.

When I moved to Lancaster Gate I had no idea at the time of the full extent of this story and didn’t realise that I was literally walking in the footsteps of J. M. Barrie each day as I escaped into the park on my afternoon breaks. I later discovered that my favourite spot is actually a secret location in the books and sits inside a ring of Spanish chestnuts that Barrie claimed had special significance.

When Arthur Rackham came to illustrate Barrie’s Peter Pan he’d come to Kensington Gardens each day to sketch. I actually met a very old gentleman in the park one day who told me that his father had watched Arthur Rackham sit on his stool and paint the old chestnuts and the other trees that stand near the Long Water. He told me that apart from the chestnuts, (which seem almost immortal, they live for so long) there weren’t many of what his father had called the ‘Rackham Trees’ left. He pointed out one to me and it still stands beside the lake today, and on certain days when the weather is overcast and the sky is darkening, it often feels like it is coming alive and full of mischief, just like many of the trees Rackham depicted. 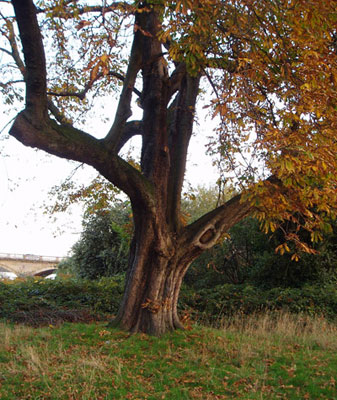 Rackham was famous for painting both trees and fairies, and in his illustrations for the story of Peter Pan we see both. One of my favourite illustrations from Peter Pan in Kensington Gardens is this one. 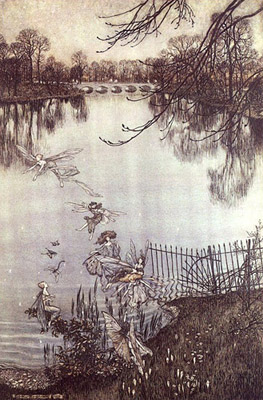 The Long Water still looks much like this today and the bridge seen in the watercolour is still there. I’m not sure about the fairies – though, I’m sure there are people who would say that they’re still there too. 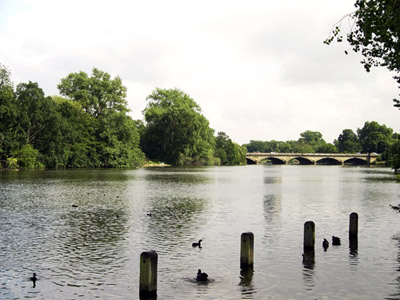 So, because Kensington Gardens are important to me, because I’m never far from them, and because the stories they hold seem to have become intertwined with my life of the last few years, I thought I would incorporate one of Arthur Rackham’s fairies into my new design for this site. It seemed somehow fitting, especially as Arthur Rackham was one of the artists who inspired me as a child and whose work never failed to spark my imagination.

As it still does today.