Just a quick plug – my first book has just been released and is out now in the shops. Co-authored with my friend and prodigious author, Simon Cox, it is titled An A to Z of Atlantis. 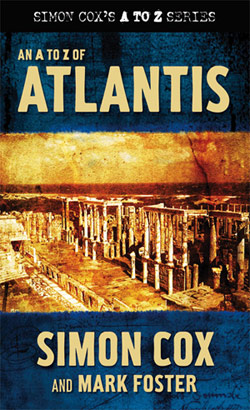 The book serves as a guide to the many mysteries that surround the fabled lost continent. Quoting from the Introduction:

There can scarcely be another subject that has courted as much controversy over the years as that of Atlantis. Thousands of books have been written about the lost continent, literally millions of words, and today the subject generates just as much interest as it has in the past, if not more.

An A to Z of Atlantis is the latest book in this long tradition. However, unlike many of the books published about Atlantis, the purpose of this A to Z is not to promote one particular theory or to argue why one location is any more likely than another to be the site of Atlantis. Rather, we gather all of the disparate strands together into one volume in order to try and present the reader with the broadest possible range of ideas.

Both myself and Simon have been fascinated by the subject of Atlantis for many years, so it is great to be able to get some of our ideas and theories down on paper at last and out in print. It should be a great read whether you are new to Atlantis or a seasoned seeker of the lost continent, and hopefully we have something new and enthralling for everyone.

I also designed the cover and it is one of four covers I have designed for Simon Cox’s A to Z Series.