The Occult
The Occult
Posted on 5th July 2007 in Book Covers, Writing
0 Comments

Today sees the release of my latest book, An A to Z of the Occult. Once again written with Simon Cox, it is the fourth in his A to Z Series. 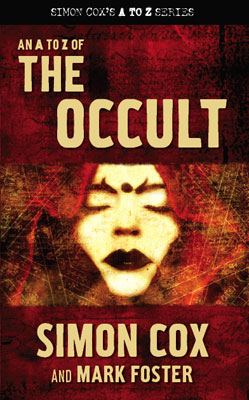 This one was a lot of fun to write. Since my late teens I have taken a keen interest in the subjects covered in this book and it is great to be able to release some of the material I have acquired during those twenty-plus years of research.

The occult has had a lot of bad press over the years and is still viewed as something of a taboo subject. Why this should be became very clear to us during the writing of this book, because we realised that what we today term ‘the occult’ seems to encompass anything that cannot be explained by the twin pillars of mainstream science and religion. Today we rely heavily on these two disciplines, expecting one or the other – or both – to have all the answers for us. So, it is no wonder that the occult is often viewed as frightening and something to be feared if it lies outside the comfortable and familiar fields of religion and science.

The A to Z format of the series works very well when looking at the varied subjects found within the occult and the book itself is rather like a Grimoire of essays examining the esoteric.

On a design note, I also put together the cover and this one is my favourite jacket from the A to Z Series. The fantastic photo on the front was taken by Dawn Allynn and it was great raw material to mould into a cover image. Photos like that are a designer’s dream.